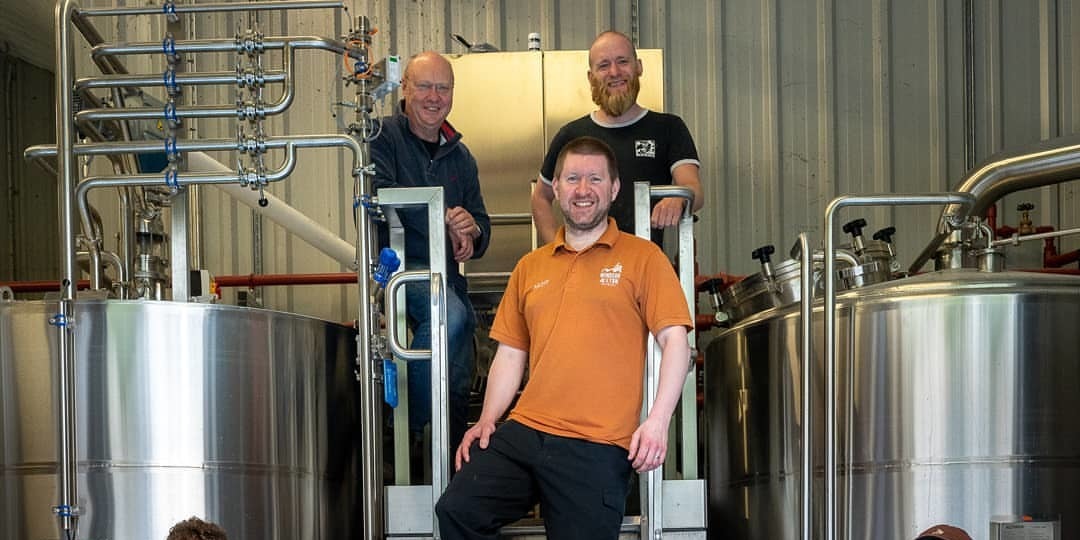 On your marks, get set, BREW!

Some of you may remember Kieran Johnson who started his Brewing career at Windsor and Eton brewery and was responsible for the development of our “Uprising” range of beers.
In 2017 he returned to his native north-west with the role of Head Brewer at the Blackjack brewery. With his Dad Paddy, who co-owns and continues to develop Windsor & Eton Brewery, a collaboration was inevitable. But how could we make it special and different from just another collab?
Our Head Brewer Matt, ironically from the North himself, and Kieran got together and decided to brew not just one beer but TWO! Both Kieran and Matt developed a recipe for their brewery but with input from the other team. The theme was “local desserts” and each beer would then be in a head to head for supremacy in dessert and matching beer. A real Bake-off style competition brew.
The results are:
Windsor & Eton Mess - a Berliner Weisse (3.6%), which is a creamy wheat beer with a lactic acid pre-fermentation to give a slightly sour note to this very light beer. A huge fruit kick is provided by copious addition of fresh strawberries!
Manchester Tart - a Stout (4.8%) that uses all the traditional flavours of a custard tart with a raspberry base, dusted with desiccated coconut and topped with a maraschino cherry with the additions of custard powder, coconut, raspberry, and cherry purees!
Now, to truly find out if the North, or the South, have the better dessert, and better beer, then it's best that they be sampled side by side. Both beers will be live in our Taproom from FRIDAY 23rd July with Blackjack also launching both beers on the same day at the Manchester Craft Beer Festival. We will also be showcasing both beers, side by side, at this year's BrewLdn event on 29th-31st July. Keep an eye on our respective social media platforms for news of other venues taking the beers.
We want to know who did it better and are therefore encouraging you to vote for your favourite on our social media platforms; by either visiting our feed and voting on the poll, or by posted/tweeting/instagramming a photo of you and/or the beers with #NORTH or #SOUTH tagging both Windsor & Eton and Blackjack. Everyone that votes, posts, shares, likes, retweets, regrams etc will be entered into a draw to win some beer.
Who will be Start Brewer? We're not the winners, craft beer is the winner!
Our handles are:
Facebook - @WindsorEtonBrewery / @BlackjackBrewery
Instagram - @WindsorEtonBrewery / @BlackjackBeers
Twitter - @WindsorEtonBrew / @BlackjackBeers
You can find out more about our friends in the North by clicking the link below.
BLACKJACK BREWERY
Share this post: